The Red Sea, where the desert meets the ocean, is truly one of the planet’s most exotic and fascinating natural seascape environments. The Red Sea is located between Asia and Africa. At its most northerly point forms the Sinai Peninsula and stretches over 1000 miles south to join the Indian Ocean, between Ethiopia and Yemen. In the north and west are desert plains, while in the south a mountainous region (2642 meters high), which is part of the mountain range stretching from deep in Saudi Arabia, across the Sinai and then into Nubia of the African continent. The Red Sea holds beneath its crystal blue surface an oasis of living creatures, reefs, and coral formation. Its use as a highway between East and West has attracted man since the beginning of time. Popular dive centers in the area include Sharm el Sheikh, Dahab and Hurghada. 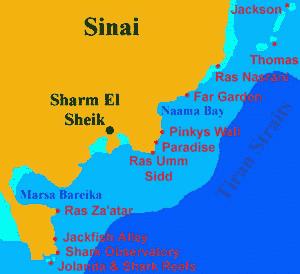 Most northerly of the reefs of Tiran, superb wall diving along its entire perimeter, with sights of sharks, turtles and other big fish.

The south side of the cape is formed by big hard coral blocks on the shallows, after dropping to greater depths with caves and overhangs along the wall.

The most seaward of the gardens, is therefore a more colourful fringing reef and more frequently visited by pelagics. Glassfish caves.

Drift dive along the fringing reef, a slope from where richly covered coral heads emerge before becoming a shear bottomless wall.

Northern side of Ras Umm Sidds wall, fully decorated coral heads rise from a gentle slope, housing schools of glassfish against a colourful background. 7. Ras Umm Sidd (27°50.950′ N, 34°18.600′ E) The south side of the cape offers a superb gorgonian forest, beforegetting to the surface of the plateau bursting with life and with the possibility of spotting big fish at the corner.

Most northern dive of Ras Mohammed National Park, it is the southern entrance to the bay of Marsa Bareika. Steep wall with caves and overhangs, becomes a gentler slope around the corner, scattered with colourful coral heads.

Southern end of Sinai Peninsula, the towering cliffs continue beneath the surface to fade into the deep blue. Smoothed wall with numerous gullies and canyons dessed with soft corals. Jacks and Turtles.

This site in one of the most strategic spots in all of the Red Sea, the two small pinnacles are joined by a shear wall dropping to the deep blue covered in soft corals. Large schools of fish gather in often strong currents with large pelagics approaching to feed on them. Small remains of the ‘Jolanda’ wreck present with scattered cargo of heaped bath tubs and toilets.

There are many different ways to explore this area. Daily Diving, liveaboard safari trips, … the Red Sea has it all. If you plan on staying in a hotel but would still like to organize a few days diving your options are endless. A considerable range of Dive Centers offer Daily diving. This consists of leaving by 9am, doing 2 dives, lunch and returning around 4pm. The Red Sea boasts some of the best local diving in the world with most sites accessible within an hours boat ride from established diving centers.

For those who would like to dive non-stop we suggest a liveaboard. Most dive centers also operate liveaboard boats and other companies specialize in this field. These trips accommodate a range of budgets and are usually full board with unlimited diving on more remote reefs. Mini safaris are available for 2-3 days, however the standard trips are for 7-14 days. Most of the major liveaboard destinations start from the Tiran Straits and Ras Mohammed, the famous Thistlegorm Wreck, Gobal Straits and Abu Nuhas and South through the Safaga Reefs, Brother Islands, Elphinstone Reef and Marsa Alam.

When to Visit Sharm el Sheikh

The Red Sea is diveable all year. The temperature remains unusually constant year round, averaging 22 C in the summer. Low pressure systems develop in the Sahara Desert and draw hot dry east winds from Asia which cause the temperature to rise frequently along with sand storms. At the same time, lows develop over the Red Sea, bringing moist cold air from the south and creating clouds, haze, and more often rain. The northern land mass is the primary influence over temperature in the gulf, but this decreases to the south the closer you get to open sea. The open sea’s cooling effect creates an interesting temperature pattern: maximum summer temperatures are lower in the south while minimum temperatures are higher in the north with the opposite occurring during the winter. The coldest month of the year is January and the warmest months are July and August.

Getting to Sharm el Sheikh

By Air: Sharm el Sheikh has an international airport and can be reached by a number of charter airlines from most European capitals.