Miller’s Point is for those who are more adventurous. It is a kelp dive on the Cape Peninsula that is done as a shore dive.

As I enter the start of the dive, I swim through a serene kelp forest filled with many different fish species, crustaceans and the odd seal. The Kelp of the Cape only has it’s fronds close to the surface so when diving there is little to worry about for entanglement. I like the kelp because like the seals in the area, I feel safe from the jaws of the great white shark.

Once I hit an open patch of sand, I settle down with my back against a rock and wait… for the seven gill cow sharks to arrive. These are large nocturnal predators that rest in this area during the day. The Sevengill Sharks typically swim with a very slow, almost lethargic motion. This swimming behaviour gives an illusion of the animal being sluggish. 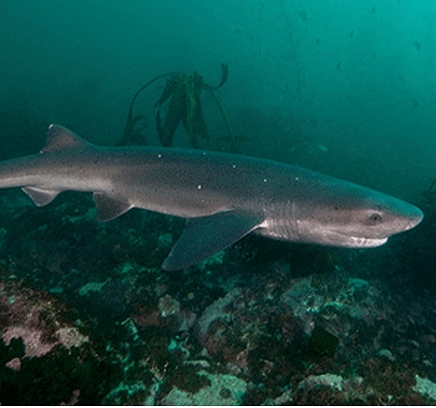 The sharks are often seen swimming slowly and paying very little attention to the numerous potential prey species around them. They are very curious about me though, and will swim right up to you. Sometimes the group can be as large as twenty individuals, with some sharks as large as 2.5 meters.

The Seven gills are docile but never try and touch them, as they will bite if they feel threatened. I simply let them surround me and enjoy the thrill of diving with sharks.

This isn’t the only highlight of this dive! I normally make my way back to the safety of the rocks in the area where you can find Leopard Catcharks and Pajama sharks resting in the small crevices. Sometimes, if I have a keen eye, I can spot up to nine different nudibranch species! This really makes for a memorable dive!

The Author: Talya Davidoff is a marine biologist, freediving champion and dive instructor.

One of the most popular shore dives around Cape Town, the difficult to find A-Frame dive site features swimthroughs and ...

Amazing dive site with Sevengill sharks. Other species of sharks may include: Gully shark, Pyjama and Soupfin and sometimes the ...

This easily accessible wreck is in the shallows in a protected bay. Divers need a permit as is it’s the ...