Been diving in Davao? Please Vote!

Few places in the world support as much marine life diversity in a very small area as the Davao Gulf in the Phillippines. With just 173 kilometers of coastline stretching from point San Agustin in Davao Oriental to the north to Don Marcelino in Davao del Sur on the South, the Davao Gulf is home to numerous marine mammals, sea turtles, pelagic fishes, coral reefs and countless other denizens of the deep.

But even with this heavy concentration of marine life, it is quite surprising that the Davao Gulf has remained one of the best-kept secrets of scuba diving in the Philippines. Instead of becoming a magnet for divers from many parts of the country, most have never gone beyond the more popular dive sites in Luzon and the Visayas.

Still, despite this general lack of awareness among the country’s diving community, Davao’s dive industry continues to survive – and in a way even thrive – with the active help of the locals. Weekend trips to Samal Island is a regular activity, with upwards of 20 divers going out in a single day. Several divers’ clubs also help maintain a vibrant atmosphere among the sport’s enthusiasts through regular activities such as coastal clean-ups, other similar environmental projects. 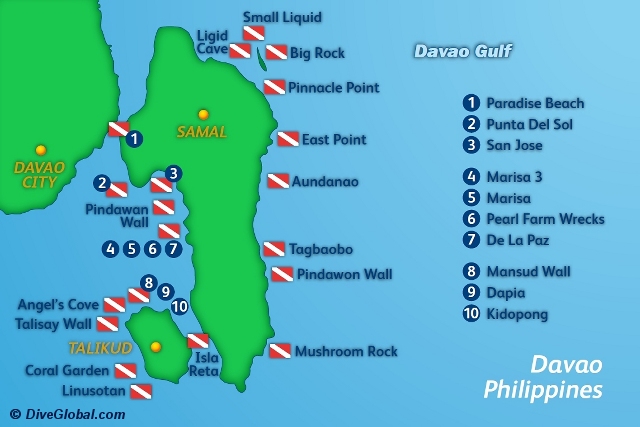 As for dive sites, the most popular ones are at Mansuod Wall, Coral Garden and Angel’s Cove in Talikud Island, Marissa Reef near the famed Pearl Farm Beach Resort, Mushroom Rock at the northern tip of Samal, the walls and artificial coral reefs of the Ligid Islands, and the fish sanctuaries of Balet and Aundanao.

All of these places offer the same diverse marine environment coupled with great visibility and easy diving conditions. Typical dives last anywhere from 30-minutes to one hour and could range from a depth of 40-feet to 120-feet. Among the creatures one might meet during the dive include everything from the ever-present ‘nemo’ (aka clown or anemone fishes), bat and lion fishes, gobies, wrasses, and puffers, to the more exotic sea turtles, sharks, tuna, barracuda and even the occasional dugong or sea cow. This wide selection of possible undersea encounters fills every dive with exciting possibilities and always one worth looking forward to.

But more than just the marine life, diving in Davao also offers a fine variety of wreck environments to enjoy. For those into maritime history, the shipwrecks in the gulf provide diving challenges for every level of certification.

For the novice wreck diver, the World War 2-era Japanese cargo ships a few meters from the shores of Pearl Farm are a great starting point. Located in 100-feet of calm, clear water, the wrecks are all relatively intact and teeming with marine life. The ships, which were sunk towards the latter end of the war – purportedly by the same US naval task force that sank the wrecks now at the bottom of Coron Bay, in Palawan – still carry the visible bomb scars that sent them to the bottom.

Diving from Pearl Farm is one of the great experiences divers can bring home with them after a vacation to Davao. Located in a secluded cove off the coast of the city of Samal, the resort is an idyllic location for relaxing under the tanning rays of the sun, or swimming on the clear, calm waters of the Davao Gulf. As one of the country’s premier resorts, Pearl Farm has witnessed the arrivals of beauty queens and dignitaries, celebrities and world leaders on its pristine shores. And recreational divers will find it the perfect jump off point for endless days of diving adventures.

Technical divers will also have a field day exploring the remains of the Sagami Maru in Talomo Bay on the Southeast side of the gulf. The ill-fated submarine USS Seawolf sank the ship, once the pride of the NYK Line of Japan, in 300-feet of water on November 2, 1942. Today the Sagami lies at the bottom, her cargo holds full of Japanese trucks and motorcycles and tons of undelivered war supplies, just waiting to be explored.

And just like the Sagami Maru, the Davao Gulf lies in wait with its untouched underwater treasures, ready to share its bounty to all those willing to make the effort. And it is truly an effort worth making, one that is sure to be filled with unexpected surprises and unforgettable memories.