Been diving in Lakshadweep? Please Vote!

The ultimate exotic diving location lies two hundred and fifty miles off the southwest coast of India in the Arabian Sea. Here, 36 islands are scattered like emeralds in a sea of aquamarine and deepest sapphire blue –The Lakshadweep Island Group, also called the Laccadives. This group of islands is located 400 kilometers from Kerala, India. It is like diving the Maldives, minus the crowds. Of Lakshadweep’s 36 Arabian sea coral islands and atoll, ten islands are inhabited, and just two, Bangaram and Kadmat, are open to visitors.

The 52,000 people who live on the 10 inhabited islands of the Lakshadweep archipelago are unique and distinctive as well. As guests on these islands you will have the chance to meet some of the friendliest people and, like them, stay in cottages made of indigenous materials with their palm thatched roofs. The Lakshadweep reefs abound with more than a thousand species of fish, all dazzling in their colors and strange in their patterns and shapes. Under water, you’ll see flat-bodied, bright yellow butterfly fishes and blue-spotted sting-rays, angel fishes and sturgeon fishes, snappers and moral eels…. and a host of others that dart in and out of coral branches. 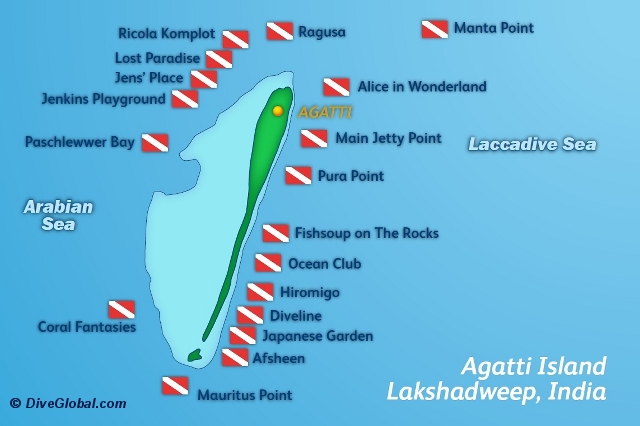 Popular dive spots off Bangaram include Manta Point and the wreck the Princess Royal, sunk 200 years ago. Manta rays, eagle rays, moray eels and green and hawkbill turtles are common. Manta Rays are mostly seen from Oct-Dec when they come to feed at Manta Point.

We were sometimes escorted by a pod of ten to twenty Asian dolphins. They rode the waves made by the dive boat at the bow. On all the dives at Bangaram we discovered the best coral formations we have ever seen. The reefs that surround Bangaram are as close to perfect as you can get. The coral provided plenty of hiding spots for the Leopard Moray Eels.

You can dive the wreck of the Princess Royal. She lays in 35 m of clear water having been sunk in battle by the French and British. Divemasters had salvaged several artifacts which were had given to the Lakshadweep Museum on Karavetti. Broken pottery was scattered all around the ship, and a swim to the west of the wreck revealed four very large cannons, about fifteen feet long, each weighing about one ton.

The tenor of life on Bangaram is refreshingly tranquil and in direct opposition to the hustle and bustle of the city. It glides along to natures soft rhythm, the salt-laden winds perfuming the air and rustling the leaves of the coconut palms. The murmur of the waves constantly caressing the shores gently lulls one to sleep as they rock in a hammock suspended between the coconut trees.

Don’t forget to visit the Ayurvedic Centre on the Island and pick and choose between the many different kinds of massages and treatment that are on offer. They are all excellent and will make you feel reborn! Go for a walk around the island (takes about an hour) and see the helicopter pad, the lake and the local huts where you can see fish drying on long lines.

Tourists are permitted to stay on only two of the 36 islands: Bangaram and Kadram. Both have dive centers. We stayed at the Bangaram Island Resort run by the Casino Group of hotels. It has the capacity for only 60 guests. The Casino Hotel offers 30 chalet-style rooms that are tastefully furnished, fan cooled and have attached bathrooms. You’ll do without air conditioners and hot water, they require too much fuel and are bad for the ecology.

The dive centre is run by friendly divemasters. Generally, there are two dives a day, one at 9:30 a.m and the second at 2:30. The boat comes back to the resort for lunch. Both divemasters are very thorough in their approach to diving in the surrounding reefs as they are aware that the island does not have any decompression chambers. They are also very protective of the reefs. Anyone who has been diving there will attest to the pristine condition of the coral.

When to Visit Lakshadweep

Climatic conditions are similar to that of Kerala coast. Average rainfall is 1600mm a year with the major share from the southwest monsoon. Almost all islands experience tropical climate with temperature ranging from 25-35°C and humidity ranging from 70-76% during most part of the year. March, April and May are the hottest months of the year.

Best diving is in November to May. The water temperature is always about 26°C. From Oct-Nov you will be sure to spot the Manta Rays feeding.

You need to first fly into Bombay or Delhi and then on to Cochin in the south of India. Regular flights operate from Cochin (in Kerala) to Agatti. Beware of delays and cancellations with Indian Airlines.

If you need to overnight in Kochi, stay at the Casino Group hotel there. They have an excellent seafood restaurant and also offer Ayurvedic treatments. You can also visit the famous Chinese fishing nets or the Dutch Palace in old Cochin.

You have to keep an open mind and not be too much in a hurry! The flight from Cochin to Agatti Airport itself in a small 10 seater Donear Aircraft is a treat to be in; especially the last 5 minutes of the descent when the clouds hovering over the island play havoc with the turbulence and then the view of the small and enchanting airport. Its just one single strip about a kilometer long and the airport terminal is also one single shed with one door for arrivals and the other one for departures. Agatti has one of the most beautiful lagoons in Lakshadweep. From Agatti there are boat transfers to Bangaram (1.5 hours) and Kadmat (4 hours). A new ferry, the just commissioned MV Amindivi provides chair car-type seating and is now in service from Cochin to the beautiful isles.

The Casino Island Resort on Bangaram is a good place to stay and dive. The costs are a little on the higher side. Its administration is done from the Group’s Kochi office.

There is a Lakshadweep information office in Delhi and in Kochi. The main Lakshadweep tourism organization is the Society for the Promotion of Recreational Tourism and Sports (Sports) with office on the Willingdon Island in Kochi.

Divers aboard this luxurious yacht are sure to have the experience of a lifetime whilst exploring the stunning remote islands ...