The Komodo Dragon is among the world’s largest reptiles. It can reach 3 meters or more in length and weigh over 70kg. Its ancestors can be traced back over a 100 million years. 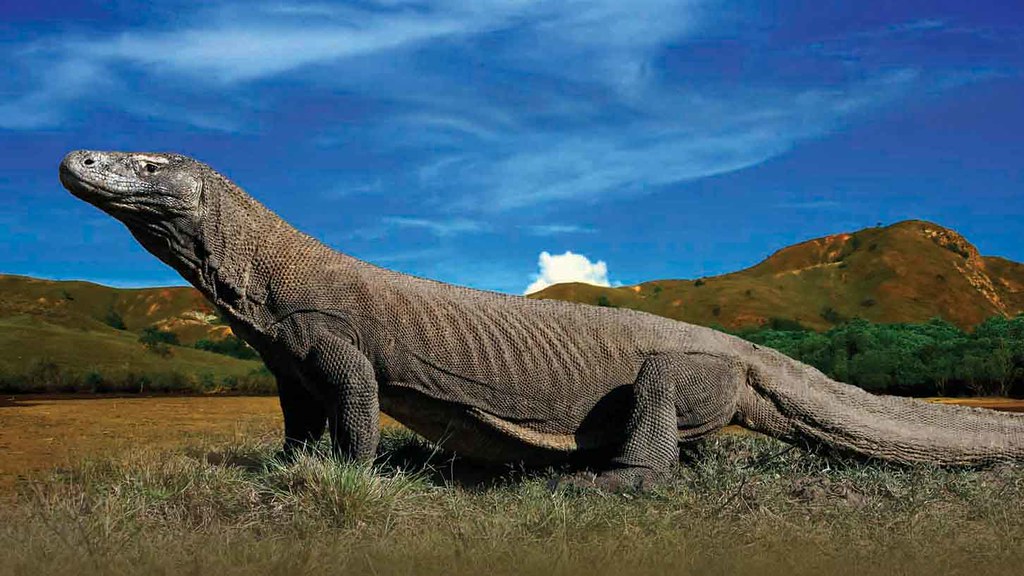 The Komodo’s preferred prey is deer, but it also eats pig, water buffalo, horses, long-tailed macaques, dogs, goats, sea turtle and bird eggs, birds, and other small animals. Young dragons eat insects as well. It prefers to eat carrion, and is cannibalistic after being attacked by a dragon. The saliva of the Komodo dragon is highly septic, and animals generally die within a week from blood poisoning.. Komodo dragons use olfactory cues to detect their prey, and usually wait in ambush or attack sleeping animals. If they can not kill the prey immediately, they will follow the bitten prey and wait for it to weaken and die. They can eat up to 80% of their body weight at a time and feed opportunistically. It takes about a week to digest a large meal.

There is no distinct mating season (copulation has been observed in most months of the year) for the Komodo dragon, however they do appear to avoid the wet season. A female lays approximately 15 to 30 eggs (average 18.7) in nests made of sand or dry leaves once per year, the majority of eggs are laid in August – September. On occasion, females lay their eggs in scrubfowl nests. The gestation period is approximately 8½ months, and the nest is guarded during the first few months only.

After hatching in March-April, the young are independent, despite their small size (average 80.3 g and 30.4 cm long), and spend a large portion of their time in trees to avoid predation by their elders, feral dogs, and pigs. This strategy also allows young Komodo dragons access to foods such as birds eggs, young birds, insects, lizards, etc., without having to compete with adults.

Komodo dragons typically shelter in the forest at night, or in burrows, and come out to warm themselves in the sun in the grasslands during the day. It is typically found in the lowlands, often near the beach, but does use the higher elevations occasionally. The population on Komodo Island was estimated to be 1,061 individuals in 1998, down from 1,722 in 1997. The decline appears to be due to high mortality rates in the young and juvenile classes. On Rinca Island, the total population was estimated to be 1,344 individuals (see table below). Auffenberg in 1970 estimated that the population size on Komodo Island was 2,348 and 792 for Rinca Island, with approximately 5,713 individuals throughout their entire range (including Flores) (Auffenberg, 1981 in Komodo Dragon PHVA,1995). At that point in time (1970), the adult male : adult female sex ratio was approximately 3.4:1.

It is extremely difficult to distinguish males and females; in some males the precloacal scales are arranged into a crude rosette. This pattern has not been observed in females. A more reliable method of sexing these animals is based on genetic markers. Recent data obtained by Italian researcher Claudio Ciofi suggest that there are important genetic differences between the Komodo and Rinca Island populations of this species.