Subic Bay is one of the Philippines’ larger towns and previously served as a United States military base up until 1992. Situated just over 2 hours from Manila, the capital of the Philippines, Subic Bay is now a developed beach town with plenty to offer for both divers and non-divers. Subic Bay has a yacht club, casino and a number of golf courses, not to mention jet skiing opportunities and other adventure activities. Visitors can opt to see more of the Philippines by signing up for a jungle trek, which is certain to be an experience unlike any other. With family-friendly activities and fantastic, friendly locals, visitors are sure to enjoy their stay in Subic Bay.

Diving in Subic Bay is all about the shipwrecks! Boasting over 19 vessels originating from both the US and Japan, many of these wrecks have been lying in the depths of Subic Bay since World War II. The area is home to a jet fighter, patrol boats, landing ships, a battle cruiser and cargo ships to name just a few. In fact, Subic Bay has the highest collection of easily accessible war wrecks available to scuba divers and technical divers. With all of these wrecks to explore, it’s no wonder that Subic Bay holds the title for runner-up best wreck diving spot in the Philippines.

Although many of the wreck sites are best suited for advanced or technical divers, there are a number of reef sites available suitable for beginner-level divers. All in all, each dive site in Subic Bay keeps to the high standard of diving in the Philippines and is certainly worth a visit for all scuba divers.

The Subic Bay Metropolitan Authority (SBMA) has made every effort to protect many of the dive sites from illegal fishing and dynamite fishing, however it is not entirely uncommon to hear the explosions of dynamite fishing occurring outside the bay area. 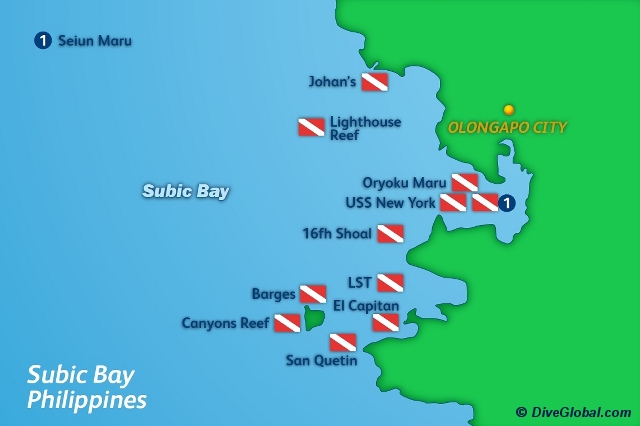 Although most of the diving spots feature historical wrecks well-worth exploring, there are about 5 reef dives available amongst the large concentration of wrecks. The reef sites can be found at Canyons reef, Runway Reef, the Barges and Nabasan Reef. These reef dives offer fantastic diving opportunities with vibrant corals and an array of marine life that make for a very interesting and colourful dive. All sorts of weird and wonderful marine species can be found in these waters including pipefish, frogfish, stonefish and puffer fish. Colourful parrotfish, graceful stingrays and large tuna and barracuda are all present in large numbers too. Sharks, coral snakes, octopi, lionfish and moray eels are also sometimes seen on the reefs in Subic Bay, preventing even the most experienced of divers from getting bored in this magical underwater world. Smaller marine life is also available for those with a keen eye including nudibranchs, manta shrimps and remoras. The reef sites are best visited during March, April and May but visibility can vary widely from day to day.

Most of the 17 dive sites regularly visited by Subic Bay dive operators are easily accessible by boat, and journey time is usually under 25 minutes. Although it is possible to do some shore diving in Subic Bay, this is mostly arranged for those doing scuba diving classes or a discover scuba diving introductory course.

The most famous of all the wrecks in Subic Bay is the USS New York. Although the vessel has been called various names in the past such as the USS Saratoga and the USS Rochester, the USS New York is an impressive wreck of 110 metres long. The vessel lies at depths of between 16 and 32 metres and is accessible to both beginner and advanced wreck divers. Whilst beginner divers are limited to the wreck’s perimeter and can enjoy the large propeller that is still intact, advanced divers are able to get a great feel for the vessel by entering the machinery spaces and boiler room.

The San Quentin holds the title of the oldest known wreck in the bay, and was purposefully sunk during the Spanish-American war in 1898 to block the entrance to Subic Bay. Having been underwater for over a century, the wreck is a thriving artificial reef and boasts over 20 different species of colourful nudibranch. At an easy depth of between 12-16 metres, the San Quentin, or the Sunken Tin as it is also known, is certainly worth a visit.

The USS Majaba has an interesting history dating back as far as 1919 and following routes in Tuglai, Guadalcanal, the Florida Islands and finally the Philippines. The Majaba received a Battle Star for her service in WWII and now lies structurally intact at depths of between 4-20 metres, making it the perfect dive for beginner wreck divers.

Getting to Subic Bay

Getting to Subic Bay from other areas of the Philippines is relatively simple as busses and cars can travel the expressway from the capital Manila or Clark. To fly into Subic Bay, visitors are recommended to make use of DMIA or Clark Airport as it is commonly known. This is less than an hour away from Subic Bay and offers connections from places such as Hong Kong, Kuala Lumpur, Singapore and Bangkok. There is also an airport in Manila, although the traffic around Manila is infamous and best avoided.

Once in Subic Bay, getting around is relatively easy and can be done by taxi, trike or jeepney service.

Where to Stay in Subic Bay

Subic Bay is a very popular destination for those seeking adventure activities, so accommodation options are plentiful, with resorts and hotels available all around the bay area as well as outside in the Barretto and Olongapo areas. Visitors can opt to stay close to the sea or to the forest, as both will provide serene natural beauty.

It is possible to explore the Subic Bay dive sites by liveaboard, as many wreck-focused routes will include a few days at Subic Bay. These liveaboards are also likely to visit Coron Bay.

When to Visit Subic Bay

Subic Way experiences the same weather patterns as other areas of the Philippines, although thanks to its enclosed and protected location, it does boast almost year-round diving possibilities aside from the typhoon months. The Philippines has two main seasons, a dry season from November – May and a wet season from June to October. Typhoons are common during the wet season and especially during the months of July, August and September. The Philippines boasts very pleasant warm weather during the months of March, April and May where the average temperature is around 27°C.

If you want to experience Subic Bay scuba diving at its absolute best, it is recommended to visit during the dry season when visibility is at a maximum, sometimes reaching in the region of 30 metres. The dry season also boasts minimal currents and warm waters. However, it is important to note that visibility can vary quite dramatically from day to day at the different sites. For this reason it is recommended to visit each site multiple times during your stay if possible, in order to get the best out of your Subic Bay diving experience.

Feeling inspired and raring to go? Check out our Subic Bay travel guide and start planning your next diving trip!