Been diving in Tanzania? Please Vote!

Tanzania certainly is the land of plenty in terms of wildlife both above and below the water’s surface. Tanzania is well-known for hosting Africa’s highest mountain, Mt. Kilimanjaro, as well as the lowest area on the African continent, Lake Tanganyika. Tanzania is also home to Africa’s five most deadly animals to hunt on foot – the “Big Five” – which can be found in the Serengeti National Park. For scuba diving enthusiasts, it’s important and exciting to note that Tanzania is bound by water on all sides, with the rift valley lakes on the western side and the Indian Ocean on the eastern side.

Some of the first-class diving sites are situated around the Zanzibar Archipelago which includes Pemba Island to the north and the incredible Mafia Marine Park. Here you’ll see a plethora of reef fish in every shape and size as well as game fish and chevron barracuda, yellow fin tuna and ribbon eels. Whale shark sightings are likely in the months from October to March and local companies will offer opportunities to spot these majestic creatures on board a traditional dhow.  It is also possible to dive in Lake Tanganyika, which offers interesting fresh water life and an unparalleled variety of cichlids in every colour.

Just 75 kilometers from the shore on Tanzania’s east coast, Zanzibar is a tropical paradise with East African flair. The markets, cobbled streets and vast sandy beaches all call for adventurous visitors to explore its offerings, and the underwater scene is no different as it offers just as much variety and colour as the lands of this “Spice Island”.

Zanzibar’s best diving locations are situated on the northern side of the island, where the dive sites offer such crystal clear waters and teeming coral reefs that one can easily be mistaken for thinking you’re in an aquarium! The area of Mnemba on the north eastern side is a small atoll that definitely has this aquarium-feel and is known by many as the best destination for tropical fish sightings in Eastern Africa. At one of Mnemba’s calmer dive sites, Watabomi, divers are treated to sightings of sea turtles, blue surgeonfish and peppered morays whilst brain coral makes up the beautiful background for the dive. Many of Zanzibar’s dive sites are suitable for all levels of diver, such as the one-of-a-kind Mwangana site, completely covered in plate coral where you can see lionfish, morays and lobsters hiding in the crevices. A popular night dive in the area, Kichafi, offers the chance to see stingrays gliding past the hard corals and the myriad of reef fish.

For experienced divers, don’t miss Leven Bank in the Pemba Channel where you’ll see barracuda, kingfish and tuna swimming in the strong current. Another site not to be missed for the experienced diver is the Big Wall on the eastern side of Mnemba. This top-class dive site begins at the Pemba Channel and offers very steep walls and sightings of rays, tuna and reef sharks in crystal clear waters.

The nearby Pemba Island takes visitors back to a time before paved roads and vehicles, as this lesser-visited island still makes use of ox-carts for transportation. With fewer tourists, Pemba Island is perfect for divers looking to explore the many world-class dive sites. Divers will be pleased to note that these sites are home to some of the Indian Ocean’s best reefs in terms of overall coral health and vitality. Many experienced divers choose Pemba as their base in order to access the many drift and wall dives and of course to take advantage of the incredible 20-40 meter visibility. To the east, Mtangani dive site is known for its rip currents and large, intimidating marine life such as hammerheads. To the west, sites around the Njao islands are slightly more protected from strong currents and are home to colourful coral walls and a great variety of marine life. 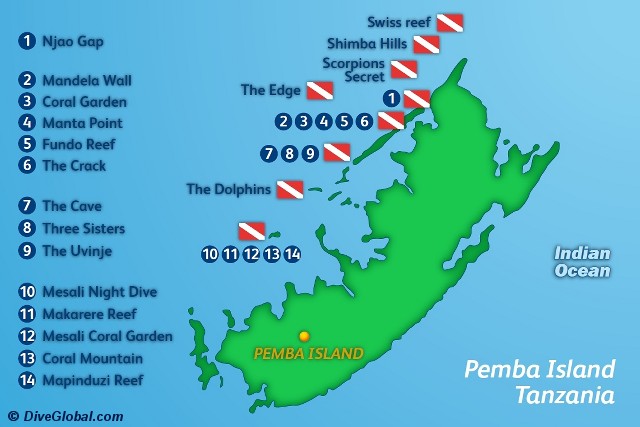 Mafia Island forms part of the country’s first protected Marine Park which consists of the Mafia Archipelago, famous for the marine biodiversity it offers. The area is home to over 400 fish species and 48 different types of coral. The area known as Chole Bay is home to popular diving spots such as Milimani Reef and Kinasi Wall, but other spectacular dives are situated beyond the bay, where green turtles, snappers, grouper and stingrays are all waiting to be seen.

The easiest way to get to Tanzania is to fly into the international airport at Dar es Salaam. From there it is only a short flight to Zanzibar or travellers can even choose to catch a boat or catamaran. If you’re coming from neighbouring Kenya, you could catch a flight from Mombasa or Nairobi directly into Zanzibar.

To get to the remote area of Pemba Island with its magnificent, untouched coral reefs, visitors can travel by boat from Stone Town in Zanzibar or fly into the small local airport from Arusha, Tanga or Dar es Salaam.

Reaching Mafia Island is possible by boat, but does not come highly recommended and most visitors choose to fly from Dar es Salaam.

When to Visit Tanzania

Tanzania has its rainy season from April to September, so the best time to visit would be between October and March, and this is also when whale sharks are present in the warm Indian Ocean, which doesn’t tend to drop below 26°C even in the cooler months. Great visibility is almost always guaranteed in Tanzania, remaining fairly constant at between 20 and 30 metres.

Where to Stay in Tanzania

Stone Town in Zanzibar is the diving hub of the island, with a number of dive centers, resorts and shops offering courses, equipment hire and transportation to the many wonderful dive sites in the area.

Pemba Island is also home to a few dive centers and resorts which provide an exclusive touch to an already private and wonderful holiday destination.

On Mafia Island, visitors again have a choice of accommodation options, all of which are located within Chole Bay and can offer transportation to reach the sites within the bay and beyond.

The Aquarium is one of the best dive sites at Mnemba Island in Tanzania. It is ideal for every diver ...

Pange Reef is a superb dive site located near the capital of Zanzibar: Stone Town.

Nice wreck in the shallows. Don’t miss the geometric morays.

Read more about The Great Northern

The Jambo is the ideal liveaboard for exploring the wonders of the west and south east coasts of Pemba Island ...