Papua New Guinea is a land of immense diversity and beautiful contrasts. From the active volcanoes in the interior to the lush green rainforests and stunning beaches along the coast of the south western Pacific, this country is unlike any other and is definitely not a destination to leave off the bucket list.

Geographically Papua New Guinea is located to the north of Australia and encompasses the eastern side of New Guinea as well as its offshore islands in Melanesia. Although it is certainly not the cheapest place to travel to from any particular location and transportation within the country can be difficult to arrange, those up to the challenge are certainly rewarded ten-fold with unbelievable history, culture and of course, scuba diving.

Papua New Guinea is famous amongst hikers for the world-renowned Kokodo Trail, but it is also well-known in the scuba diving world as a major attraction offering an impressive number of spectacular dive sites. Aside from the wide variety of marine life and magnificent underwater topography on display, dive sites in Papua New Guinea have the added benefit of being unspoiled by tourists and tour boats. Boasting a coral reef system that is one of the largest in the world, diving traffic is diminished thanks to the dive sites being well dispersed and not all concentrated in one location. The reefs are also well protected from overfishing and other dangers by local tribesmen.

The major dive sites can be divided into three general areas:

New Guinea is the mainland and thus the most well-known of the three main diving areas. It includes Milne Bay, Bootleg Bay, Tufi, Madang, Port Moresby and Wewak.

New Britain includes areas on the southern coast as well as Rabaul, Kimbe Bay and the Duke of York islands.

Of the three main diving destinations, New Ireland is by far the least developed but includes the town of Kavieng in Balgai Bay. 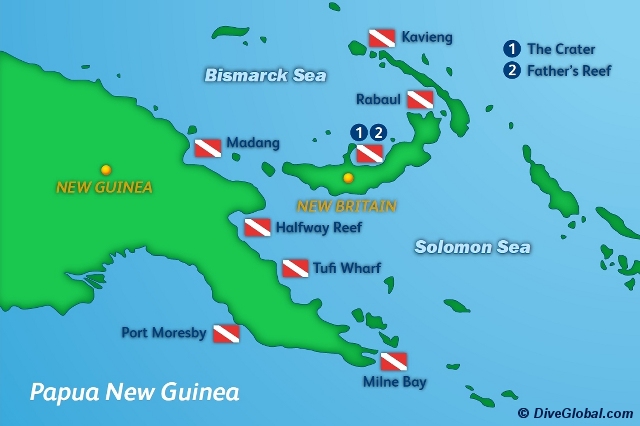 Scuba diving is well established in many locations in Papua New Guinea (PNG) and becoming so in the Raja Ampat area of West Papua. The Milne Bay area at the southeastern tip of the main island and Kimbe Bay in the centre of the island of New Britain are probably the two most popular diving locations in PNG.

Papua New Guinea is home to exhilarating drift dives and wall dives with intimidating vertical walls that drop off some 300 metres into the vast ocean. There are also many protected coves, bays and inlets, many worthwhile macro sites and a number of great wreck dives to explore. Basically, this diving hub offers something for everyone.

The deep water dives offer sightings of hammerheads, white tip reef sharks, manta rays and large tuna, whereas the shallower, more sheltered dives will give divers the chance to spot a multitude of reef fish and green sea turtles.

Papa New Guinea is located right within the infamous Ring of Fire, an area renowned for volcanic activity and earthquakes. As such, the underwater landscape features long stretches of volcanic arcs, belts and oceanic trenches that make for exceptionally interesting dive sites. In terms of marine life, Papua New Guinea boasts more than twice as many species as the Egyptian Red Sea and almost ten times that found in the Caribbean.

Many argue that muck diving was invented in Papua New Guinea and with such a large range of macro species to be found, it’s little wonder why so many people come to the area to spot the small stuff. Pipefish, seahorses, gobies and shrimp are just some of the species you’ll see lurking about certain areas, and ensure your underwater camera is ready to capture the large variety of nudibranch species that can be seen.

The mainland of New Guinea with the capital of Port Moresby are where many divers begin their Papua New Guinea diving adventure. From Port Moresby itself you could dive a number of wrecks and reef dives includes those along the Papuan Barrier Reef.

Just a 50 minute internal flight away from Port Moresby is Milne Bay, a very popular mainland diving location. Wahoo Point is famed for shark sightings whereas Pelagic Point and Sponge Heaven give away their main attractions in the name of the dive site.

Madang is also just an hour’s flight away from Port Moresby and offers every kind of dive from beginner dives to entirely advanced dives. Wrecks, channels, reefs and underwater mountains are all part of the landscape off Madang Island.

Slightly further afield but still reachable via plane or boat from Port Moresby is the magnificent area of Tufi with top class resorts and marine life sightings. Divers can expect to see everything from barracuda to hammerhead sharks with over 30 sites available at your fingertips.

Milne Bay is best dived from a liveaboard and offers a tremendous variety of diving from the weird & wonderful critters found muck diving at Dinah’s Beach to the superb corals at Deacon’s Reef and manta rays at the cleaning station just off the beach at Gonu Gonu Bara Bara Island. The area is served by three liveaboards all of whom have a good, and thoroughly deserved, reputation – Chertan, Golden Dawn and Telita.

Kimbe Bay can be reached by aeroplane from Port Moresby and the 200+ offshore sites in the area are particularly renowned for featuring a huge range of hard and soft corals. In fact, a whopping 70% of all indigenous corals are present in this area. Colourful, larger-than-life sea fans can also be seen waving in the mild currents.

As one of the more remote locations, New Ireland is less popular with tourists however, divers and snorkelers are well aware of its impressive underwater offerings. The area surrounding Kavieng is well-known for strong currents, impeccable visibility and large species of pelagic fish, not to mention great surf for both surfers and kite-surfers. Muck diving is very popular, especially in the area surrounding Kavieng Harbour where there are also some ship wrecks and sunken sea planes to visit.

When to Visit Papua New Guinea

The rain outside of the wet season, which runs from December – March, is unlikely to have large impacts on visibility.

For Milne Bay diving, plan a visit sometime in March, and for dive sites located in the Coral Sea you’re likely to get the best diving in the month of December.

Kavieng diving can be done at any time of the year, but is best during the months of April, May and June or September, October and November.

Getting to Papua New Guinea

Port Moresby, the capital, is by far the most accessible location for visitors coming from any part of the world. Regular flights from Japan, the Philippines, Singapore and Australia are all welcomed into the Jackson Field International airport at Port Moresby.

The airport also serves as a transit point for divers looking to travel between diving locations as road travel is not at all recommended due to lack of infrastructure and the slow pace at which road traffic moves. There are also a few other airports in Milne Bay and Kavieng, whilst Kimbe and Tufi have tiny airports suitable for chartered flights.

If you’re serious about getting the most out of your diving experience in Papua New Guinea, a liveaboard might be a good option to explore dive sites non-stop from the comfort of a fully-equipped diving vessel.

Where to Stay in Papua New Guinea

Many of the dive operators are located within large resorts, where divers will be required to pay an individual diver’s fee that will cover reef protection by the local tribes people.

Something to keep in mind is that dive locations in Papua New Guinea are extremely remote and not necessarily located nearby medical facilities should anything go wrong during a dive. There are very few recompression chambers in the country, with the most well-known facility located in Port Moresby. For this and other reasons, divers are advised to take out additional diving insurance just to be on the safe side.

The Chertan is a 60ft yacht offering a safe, comfortable journey for up to 10 passengers. Recently renovated to a ...

Papua New Guinea, where our fabulous liveaboard vessel, the MV Febrina is located, is a true diving wilderness, and is ...

Good day,im frederick de castro,im flying to Port moresby ,PNG,tomorrow,im interested togo diving there,is there any accomodation for you to recommend for me a d howmuch?im looking forward for your good response…..thank you

Arriving in Rabaul in November on Sun Princess and looking for a day of diving. Is there a local operator that can accommodate.

Hello!
This is DRT show. As a professional diving show organizer, DRT show performs a lot of shows in Asian-Pacific region, including Hong Kong, Taiwan, Beijing, Singapore, Malaysia and Philippines.
In April, 2018, we will hold an event of diving in Shanghai, China, which has 400 booths with cross space of 12000 sqm, definitely the largest dive expo in Asia. We invite you to participate in the show to develop a market in China.