Did you dive with the Seven Seas liveaboard? Please Vote!

The Seven Seas is everything that a perfect liveaboard should be. For anyone who wants to dive in the fantastic waters surrounding the Indonesian islands, whether through a dive cruise or by chartering a yacht, The Seven Seas is the right solution. It undertakes cruises to all the interesting dive sites of Indonesia in various combinations, thus becoming an entry ticket to the fantabulous vibrant life that the sea hides beneath its calm. 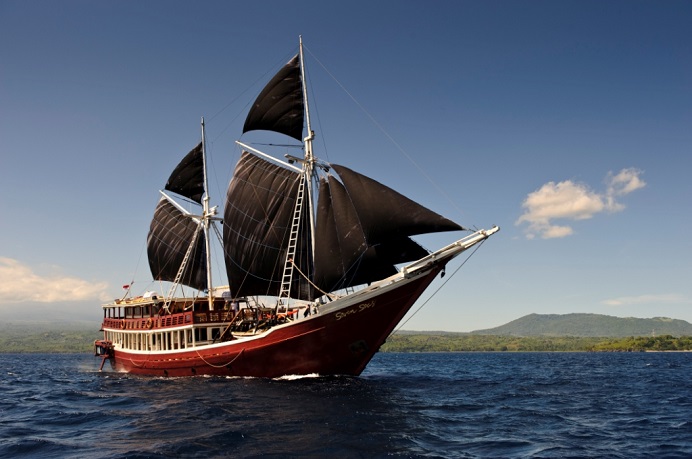 The Seven Seas is built in the conventional Indonesian style. It is made of Borneo ironwood, one of the strongest and heaviest woods in the world, and has a length of 45 metres (LOA – the length of the hull). The vessel is designed to house 16 people in its 8 rooms and is built to the luxury standards of present-day Indonesian liveaboards. The way it is built, it can be used for diving, cruising, island hopping, or just plain leisure entertainment.

The Seven Seas runs trips to many places like Banda Sea, Komodo, East of Flores, Deep South Komodo, Raja Ampat, and Forgotten Islands. It is fashioned and adapted in every way to make it absolutely stable in the waters of Indonesian islands, and to make the journey enjoyable to the travellers.

The “Coral Triangle” is an area of incredible beauty. It is the heart of global marine biodiversity. The variety of marine animals that one sees in this tropical-water triangle can rarely, if at all, be seen anywhere else. It is to these fantastic dive sites that the Seven Seas will take you.

The amenities that make the Seven Seas cruise absolutely enjoyable and safe:

The sheltered lounging areas and the cabins with elegant teak furniture are among the many features that ensure customer comfort. The navigation system and safety provisions are the best and latest, and there are three speed boats. The satellite communication is flawless and continuous.

Our crew is among the best in the field. The two Western cruise directors bring to the job their expertise and experience of leading cruises on various oceans across the world. The eighteen-man Indonesian crew is professional to the core, and fully committed to maintaining high standards. Together they ensure that you will have the most unforgettable trip of your life.

The sea is powerful and beautiful, alluring and challenging. Different people choose to enjoy her in different ways. Be it diving, snorkelling, fishing, sea kayaking, or organizing beach parties, we can do it to your fullest satisfaction. We are here to organize your adventure holidays. And if you just want to relax and enjoy the sea, we have provision for that too. Spa, yoga, massage – many are the services that we provide, though some of these may be seasonal.

The Seven Seas liveaboard can house up to 16 guests across its 8 comfortable and cozy cabins.

The seven seas cruises to Komodo

If you’ve ever been to Komodo, you’ll know that its wealth of tiny riches can be overwhelming. So overwhelming, in fact, that some divers don’t even think about photo subjects larger than a zebra crab or purple frogfish.

But if you plan a trip to Komodo, don’t make the mistake of leaving your wide-angle lens at home!

What most divers might not know is that the real treasure of Komodo National Park is in fact its incredible variety of marine life within many diverse habitats. This includes seamounts, patch reefs and “BFRs” (the term dive guides use to mean “enormous rocks”) — all of which see plenty of big fish action.

Experience has shown me that big animals can show up at any dive — usually when you least expect it.

My first-ever Komodo dive on Cannibal Rock eight years ago culminated with a pair of mating pygmy Bryde’s whales swimming circles around our boat moored 200 metres away. Naturally, Murphy’s Law came into play. I only had my 105 mm macro lens.

Mantas are the attraction at Manta Alley in South Komodo during the southeast monsoon from June to September, but the friendly rays can show up at any time on almost any dive.

The pièce de résistance of manta diving, however, is Karang Makassar, a submerged patch reef more than two kilometres in length. At the right moon and tide, Komodo’s mantas assemble to feed on the surface in a huge school that can extend over half a kilometre, and number over 100 animals!

Only the most experienced operators know how to time this correctly, and even then nothing is guaranteed. The best chances to see large numbers of mantas here is during the northwest monsoon from December through March.

And take note — this is a snorkelling experience, rather than a dive. Get it wrong, and you’ll feel like you’re driving the wrong way on the (manta) expressway.

North of Komodo Island lies Castle Rock and Crystal Bommie. The top of Crystal Bommie breaks the water’s surface only at the lowest tide. Currents can be powerful, and are strongest at the surface. Standard entry is to drop in 30 metres up current and swim quickly down to the reef.

There are prizes for getting to the front of the reef — tickets to Predators’ Ball itself! Dense schools of unicornfish, fusiliers, jacks and rainbow runners nearly block out the sun. Raiding giant trevallies swoop by, joined by dogtooth tuna, whitetip reef sharks, and sometimes, bottlenose dolphins. Those who venture deeper may see grey reef sharks down at about 40 metres.

For an even more thrilling dive, there’s Tatawa Kecil, a small rocky islet and egret nesting site, due east of Karang Makassar. Nearby is Batu Bolong, a narrow seamount that rises vertically from the ocean floor.

Currents at Batu Bolong can be much wilder than at Castle Rock or Crystal Bommie. These locations must be dived at or near slack tide. Some operators refuse even to attempt these sites, and with reason — there have been serious accidents, even fatalities.

The one refuge at Batu Bolong is a narrow slot that runs down the side of it, which provides shelter from the worst of the currents.

If the timing is right, you’re almost guaranteed one of the most thrilling, fishiest dives of your life. But if the time and tides don’t work, then discretion is definitely the better part of valour.

As a back-up plan, there’s a good semi-protected drift dive at nearby Tatawa Besar that’s usually safe at times when currents on Batu Balong and Tatawa Kecil are raging at full force.

The ideal time to visit the seamounts and reefs in the northern part of the park is May to October. In general, there’s spectacular visibility at that time. The southern sites may be better suited to macro photography during this period.

For crystal-clear water at the fantastic reefs in the south, visit Manta Alley and Horseshoe Bay from late December to March.

For experienced guides who will show you a good time, there’s the Seven Seas liveaboard, a well-organised base for exploring Komodo’s marine life. The people who run Seven Seas are great at what they do. There’s Mark Heighes, who has been organising dive trips in Komodo for more than two decades, and Jos and Lida Pet, who have worked on marine research and conservation projects in Komodo and elsewhere in Indonesia since the late 1980s.

They offer cruises of various lengths in Komodo between April and September on their newly built 250-tonne Phinisi schooner. They usually shift to alternate locations in West Papua and the Banda Sea from October to March.