Boracay island needs very little introduction when you consider the number of awards it has won, including its recent achievement of “Best Island in the World” according to Travel and Leisure magazine. The tiny island may only be 7 km in length and a mere 500 m wide in places, but this gem located in the Western Visayas region of the Philippines is unlike any other place on earth and easily explains the phrase ‘picture-postcardt’. Known for its relaxing white sandy beaches, fantastic nightlife and magnificent blue waters, it should come as no surprise that Boracay boasts exceptional dive sites too.

Whilst the majority of tourists are only there to soak up the sun and absorb the tranquil atmosphere, divers of all levels have an underwater paradise awaiting them nearby, and the best part is that it won’t cost them an arm and a leg. There are upwards of 25 scuba diving sites within a 10 minute boat ride of Boracay, not to mention a wide variety of dive site types including wrecks, drift dives, vertical walls and coral gardens. 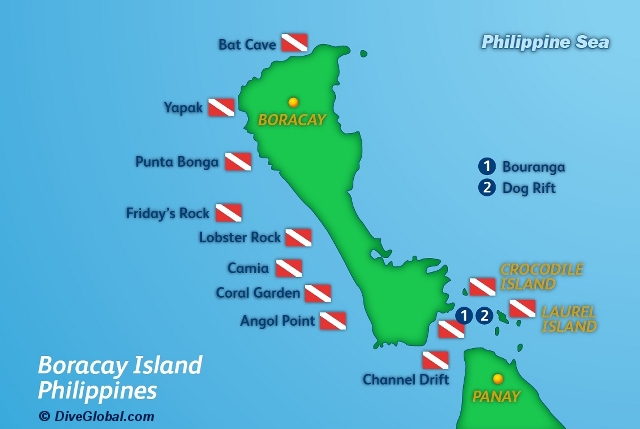 This sheltered dive site is suitable for all levels of divers and can be visited at any time of year, rain or shine. The site boasts an impressive variety of macro life for those interested in the weird and wonderfully adapted creatures hiding out in the sand or the nooks and crannies of the reef. Resident garden eels have been known to congregate on the sandy ocean floor and makes for an interesting photograph for those with underwater cameras. Feather starfish are quite a common sighting at Malabulot, with their sticky, feathery arms being used for movement as well as trapping microscopic passers-by. Divers can also expect to see clownfish, a number of shrimp and brilliantly-coloured nudibranchs.

Located to the south of Boracay and only a 15 minute boat ride away from White Beach, Crocodile Island is a shallow, well-known dive site that never fails to disappoint. A large number of reef fish such as scorpion fish, sweetlips and box fish are usually spotted and the macro life adds another dimension to an already great site. Many divers opt to go night diving at Crocodile Island.

Between 25m and 30m below the water’s surface lies the Camia II, the well-known wreck dive in Boracay. Quite a recent addition to these waters, the steel hulled ship was donated by a Manila fishing company and was purposefully sunk in the early 2000s. It is now home to an abundance of marine creatures including schools of bat fish, ghost pipefish and the odd scorpion fish.

The Yapak walls are probably the most famous dive spots in Boracay, and for good reason. Unfortunately not for beginners, only experienced divers are allowed to descend the walls starting at 30m and continue to over 70 m. The walls contain a myriad of colours and textures thanks to a wide variety of corals and gorgonian sea fans. Yapak 1 and 2 are where you’re likely to see both white-tip and grey reef sharks as well as schools of dogtooth tuna and jacks. More rare are the sightings of hammerhead sharks and manta rays, but keep a lookout in the blue water to see if you recognize the tell-tale shapes of these magnificent creatures.

Many would agree that the most suitable weather for diving occurs from October to May. During this time, it is possible to access the majority of dive sites and visibility is nearing its peak of 30 m during April, May and June. In December, January and February the visibility might deteriorate to an unimpressive 5-10 m due to an abundance of plankton in the water. Water temperatures remain on the warmer side of things, ranging between 26-30 °C from December and onwards into the summer. If you do happen to visit during the rainy season and plan to dive, a multitude of sheltered dive sites will still be available on the easternside of the island.

Getting to Boracay, Philippines

The easiest way to get to the paradise of Boracay is via boat from Caticlan. In true and authentic island style, there is no jetty on the island, so you’ll need to enter the water in order to reach the island. Visitors can make their way to Caticlan from the airport in Manila or even fly into Roxas or Kalibo and catch a bus into Boracay.

Where to Stay in Boracay, Philippines

Accommodation is often available through local dive centres and upscale dive resorts located on Boracay island but visitors do have the option of staying elsewhere and arranging dives through the numerous dive tour operators.

For those looking to advance their diving skills, Boracay offers a number of cost-effective training locations.

Feeling inspired and raring to go? Check out our Boracay Island travel guide and start planning your next diving trip!

Friday’s Rock dive site in Boracay is well known as a fish-feeding station and it is one of the oldest ...

Crocodile Island is said to be one of the best dives in the region as there is a lot to ...

Yapak is one of the most visited dive spots in the Boracay area because it is home to many of ...

Boracay Island is a beautiful tropical island and its Lagoon, Laguna De Boracay, is a fantastic dive site. The site ...

This is a great dive within the Boracay area for beginner divers and for training divers. The site goes to ...

Laurel Island dive site is a great opportunity for divers to see many marine species and lots of different corals. ...

This is a very good dive site with a chance to surface during the dive and enter a cave full ...

Looking for quote for 6pax discover scuba, and the same group has 4 other divers who are able to do fun dives. Date: 4 or 5 November.

Im a PADI OW diver and scheduled to be in Boracay from Oct 29 to Nov 2. Im interested in taking my Advanced OW if the time allows. Can you tell me how much would it cost me (I only have a wetsuit, nothing more) ? Equipment, AOW manual ,sanctuary fees,etc. included.Number of dives? Number of days? I might pay with Credit card.
Thanks

Hello i want reservation fun diving 2 or 3times for 2 people at 10/03.
We have advanced license but have to rental equipment.
plz let me know schedule, can go yapak point and rate?

Hello i want reservation fun diving 2 or 3times for 2 people at 10/03.
We have advanced license but have to rental equipment.
plz let me know schedule, can go yapak point and rate.